Worth Another Listen - Crowded House 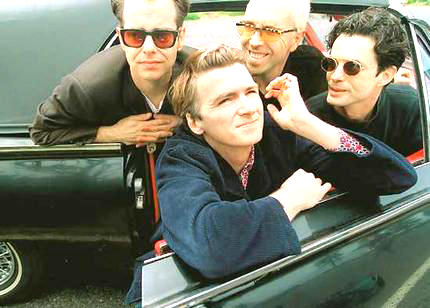 Crowded House is one of my favorite Aussie bands - and maybe one of my fave bands - ever. I was just crazy about their music. They came together in Melbourne in 1985, after several closed down the band Split Enz. Neil Finn, Nick Seymour and Paul Hester, along with non-Enz-er Craig Hooper, started playing as the band The Mullanes, and the name was changed by Capitol Records to Crowded House. They released their first offering, the eponymous first album, which had little promotion from the studio. The first single, Mean To Me, had moderate success worldwide, but failed to chart in the US. So with little fanfare the studio released a second single in December 1986, without much faith they would crack the US market. That single was Don't Dream It's Over, which reached #2 on the US charts and various #1 spots across the world.

Crowded House had smart lyrics, smooth music with great hooks, and a depth of production that was mighty impressive from the start. Neil Finn was looked at as the artistic leader of the band, and brother of Tim Finn, founding member and leader of the Split Enz. With the success of Don't Dream It's Over and the follow up, Something So Strong, many were looking forward to a sophomore effort of the band, named Temple of Low Men. While it didn't have quite the success of the first album, it did have several of my favorite songs, including the gorgeous Better Be Home Soon, the first released single.

The next two albums, Woodface and Together Alone, were met with a cold reception in the US, and a rather cool one worldwide, and in 1996, Neil Finn announced the end of Crowded House. Woodface included seven songs written by Neil with brother Tim Finn, including the interest Weather With You.

Recently, Crowded House reunited to do some charity gigs, and started working on some new material. A new album is expected to be released in January or February of 2010, with a sound Neil Finn says is very different than they have been before. For more information about Crowded House, visit the official website here.
Posted by Unknown at 7:00 AM