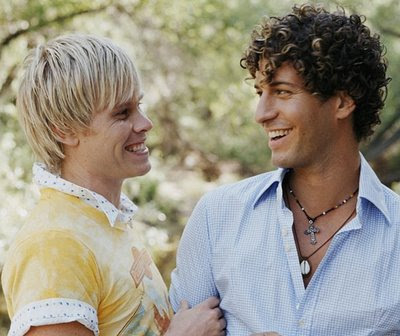 Jason & deMarco are about as precious as you can get. And I mean that in a nice way. They are out singers, who started out in the Christian music scene that was not particularly welcoming to their gayness. They have made the move to a secular sound and style, both maintain a strong Christian faith, having no problem reconciling it with their relationship. They sing pure pop, something I can truly enjoy.

Together they have put out a couple of CDs, and play several Pride Fests each year. They tour to support their music, and have appeared in the documentary We're All Angels. Their latest CD, Safe, shows real growth as artists, playing more with rhythms and harmonies than before. They cover the U2 song One, with a nice use of percussion instrumentation, as well as several original songs, many of which they have cowritten. This includes the song This is Love, sung live below at a show in Toronto.

You can find out more about them at their website, and their MySpace page, which has several songs.
Posted by Unknown at 12:01 PM

Email ThisBlogThis!Share to TwitterShare to FacebookShare to Pinterest
Labels: jason and demarco, live show, pop music, this is love, videos