Worth Another Listen - English Beat/General Public 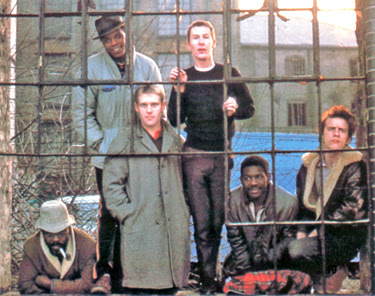 What binds these two bands together? The gorgeous faces of Dave Wakeling and Ranking Roger. They started out together in a band named The Beat in their native England, but called The English Beat here in the states. They formed in 1978, but released their first album in 1980. The Beat were a Ska band, embracing some of the reggae beats and speeding it up a bit giving it more of a pop/dance feel. This put them in the same ground as Terry Hall and The Specials, although The Beat stayed away from the political and social issues of reggae, holding more of a romantic view. They had success with songs like Tears of a Clown, Ranking Full Stop, Can't Get Used To Losing You, and Hands Off She's Mine.

In 1983, The Beat called it a day, and Dave and Roger went on to form General Public. The first album, All The Rage, was released in 1984, and spawned a couple of hits in Tenderness, Never You Done That and Hot You're Cool. They garnered some attention with song placement in several movies, including the immensely popular Ferris Bueller's Day Off (Taking The Day Off).

The stayed together thru the mid 90s, but to little avail, with only moderate success with I'll Take You There. The stayed apart until the turn of the century, and have toured from time to time with other bands from the 80s, mostly sticking to the Ska sound of The Beat.
Posted by Unknown at 8:00 AM