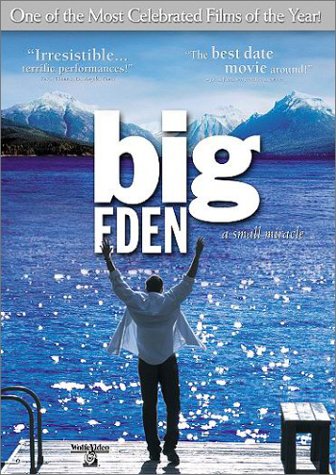 I just love this movie! It positively drips with charm and grace. Both Henry and Pike are adorable and sexy, and I wanted a SamPa of my own. I have the DVD, and watch it every so often, and it reminds me life is good. Originally released in 2000, Big Eden won awards at film festivals across the country as it played to critical praise and audience cheers.

Starring Arye Gross, Eric Schweig and Tim DeKay and set in a fictional Montana town, it is a touching and romantic movie, with lots of joy to be found for Henry, played by Arye, an artist living in NYC who returns to his hometown to help out his ailing grandfather. There he gets to see Dean, now a father of two, but back in high school something happened that left Henry aching to see Dean again. And there is Pike, the tall Native American man who is so very shy, but manages to make dinners for Henry and Sam. Another character is the gorgeous scenery, and the inherent charm of the cast and themes.