Worth Another Listen - Thomas Dolby 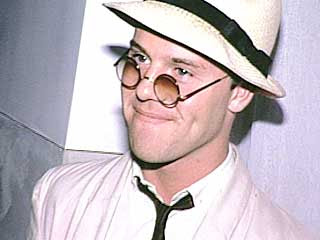 Yep, another of those 80s acts I just adored, Thomas Dolby. And yes, I still listen and think the boy was years ahead of his time, and quite brilliant. He is Pop, Opera, Electronica, Rock and visual painting all rolled into one. Huge, bombastic, and layered, Dolby's music helped to spearhead utilization of synthesizers in the 80s, and was invited to play on on the 1985 Grammy Awards with Stevie Wonder, Herbie Hancock and Howard Jones.

His most well-known hit was She Blinded Me With Science, and it was big. Still, my favorite was Hyperactive. As a musician, he played the synth in the studio and on tour for such greats as David Bowie, Joni Mitchell, The Thompson Twins, Lene Lovich, Def Leopard, and Foreigner [that was him on Urgent & Waiting For A Girl Like You]. He also worked as a producer and co-producer, including on Joni Mitchell's Dog Eat Dog, Prefab Sprout's Steve McQueen & others.

Always keeping ahead of the trends, Dolby has also started up a few companies. First there was Headspace, developing and implementing file formats for digital music; Retro Ringtones, which won the Best New Technology Award at the 2004 Mobile Music Awards; and is the Musical Director for the TED Conference, an annual event in Monterey, California, that attracts some of the world's foremost thinkers, inventors, and speakers. He is also married and the father of three.

To find out more about what is happening with Thomas Dolby, visit his website.
Posted by Unknown at 9:00 AM

Email ThisBlogThis!Share to TwitterShare to FacebookShare to Pinterest
Labels: 80s Music, hyperactive, she blinded me with science, thomas dolby, videos