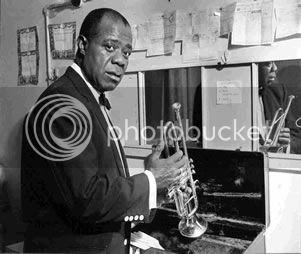 This morning I thought it would be nice to hear a couple of spirituals that are traditionally heard in some of the southern churches. It didn't take me long to pick a couple of songs, and an outstanding artist to sing them both. Louis Armstrong made a name for himself first as a jazz musician, playing the cornet and trumpet. He would also take the microphone, and sing a song with his throaty voice that was hard to forget. The first song I found was "Nobody Knows The Trouble I've Seen". The song was a recorded in 1935 by singer Marian Anderson. Give Louis a listen.

Next up, there is another traditional spiritual, "Go Down Moses". Based on a verse found in the Scriptures, it was thought to be sung by the slaves in the South while they worked the fields. Lyrics were first published in 1872, it quickly became a favorite of gospel singers and groups all around the world. Here is a stunning version by Armstrong.

You can find both songs on Louis And The Good Book, available on iTunes and Amazon.
Posted by Unknown at 10:00 AM