CSN • Just A Song Before I Go 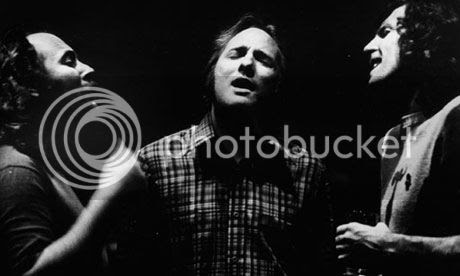 There are certain things I miss about the music of the 70s and 80s. One of those is the shear beauty of groups who not only knew how to sing, but would write with gorgeous harmonies. Outside of boy bands, that really doesn't happen anymore. But there was a time when it not only happened, but it happened a lot, and it was divine. One such group was the iconic Crosby, Stills & Nash, all three members of the Rock And Roll Hall of Fame. When David Crosby, Stephen Stills and Graham Nash were singing, it was as if the angels took flight. One such time would be when they were singing the song written by Graham, "Just A Song Before I Go". The song, off off the 1977 album CSN, made it to #7 on the Billboard Hot 100. The song was their highest charting single. The album was certified quadruple Platinum. In fact, of their first five albums, they had two certified Platinum, two quadruple Platinum, and one seven-times Platinum. Listen and find out why.

You can purchase CSN on iTunes and Amazon. Have a great Saturday.
Posted by Unknown at 10:00 AM