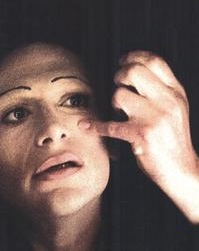 I have no particular reasoning behind my decision to post about Harvey Fierstein tonight, except to say I just love his work. I first saw him in Torch Song Trilogy a very, very long time ago. I am quite glad to say I think we have both aged well. Harvey has had a remarkable career in theater, starting with his work off-Broadway. Torch Song Trilogy began as three independent one-act plays that were combined into an evening's tour-de-force. For his part in the show, he won two Tony Awards, one for Best Actor in a Play, and Best Play, for the script he had written. While the show had more than enough funny and outright hysterical moments, it was the touching parts that are perhaps the most memorable. It is scenes like this one never failed to leave me in tears.

Working off-Broadway in the 80s, I was also lucky enough to see Harvey in a show at the Actor's Playhouse. Onstage, he is just amazing, so charismatic and yet still very human, very easy to relate to. Harvey has been a veritable force of nature since Torch Song, known for his outspoken nature and his ability to be himself, no matter what. Check out this interview from 1983 that shows at a time when few were talking about LGBT issues, Harvey had no problem at all.

As he mentioned in the interview, he next went on to write the book for La Cage Aux Folles, for which he again won the Tony Award. Harvey earned another Tony Award for his performance of Edna Turnblad in the 2003 production of Hairspray. The show was based on the John Waters film of the same name, starring Divine as Edna.

As is often the case, you can't beat Harvey when it comes to acceptance speeches. Here is a clip when he won Tony for Hairspray.

In 2004, Fierstein stepped into the role of Tevye in Fiddler On The Roof after Topol, who had originated the role in the movie, had to step aside.

In 2007, I went to see him in A Catered Affair, an amazing show that closed far too soon. He wrote the book to the musical, and also had a featured role as the gay uncle. I saw it with Harvey, Faith Prince and Tom Wopat. So, almost 30 years after he opened in Torch Song Trilogy, what is Harvey up to? Plenty. But I'll let him tell you in a clip from a recent appearance.

Harvey collaborating with Cyndi Lauper? Sounds like heaven to me! He is also scheduled to be going into the cast of La Cage Aux Folles next month.
Posted by Unknown at 7:00 PM