Worth Another Listen - Naked Eyes 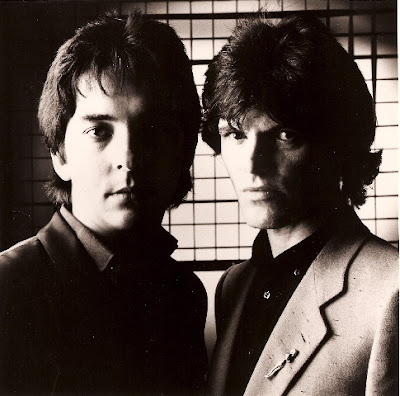 In 1983 a British synth-pop group seem to come out of nowhere with an unusual cover of a Burt Bacharach/Hal David song, Always Something There To Remind You. It was strange, for I instantly recognized the song as a former Dione Warwick song, could sing along and just loved it.So I went out and bout the album [yes, I was still buying vinyl at that point] and just loved it.

Naked Eyes - Always Something There to Remind Me
Uploaded by Tunashaker. - News videos from around the world.

Naked Eyes were Pete Byrne on vocals and Rob Fisher manning the keyboards. They secured a second hit in the US with Promises Promises, which had a more soulful feel than the Bacharach pop song. They put out a 2nd album, Fuel For The Fire, in 1984, which had some moderate success on the charts. Soon they parted ways, with Fisher joining another British group, and Byrne writing for others, including the Olsen Twins song, I Am The Cute One.


In 1997, keyboardist Fisher passed away following a blattle with cancer. Since then Byrne has enlisted the aid of others and is working on another Naked Eyes release. You can learn more about Naked Eyes from their official website, found here.
Posted by Unknown at 7:00 AM