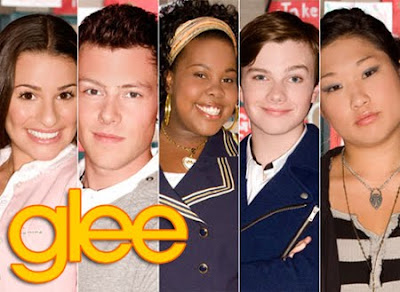 From EW.COM, this is another exclusive preview from the coming episode of GLEE, Throwdown. According to EW:

Next week’s episode of Glee, directed by co-creator Ryan Murphy, is chock full of fantastic performances, including Mercedes covering Jill Scott’s “Hate on Me” and a Rachel/Finn version of Jordin Sparks and Chris Brown’s “No Air.” But probably the most dramatic moment is the climactic glee club performance of Avril Lavigne’s “Keep Holding On.” I don’t want to spoil the episode for you Gleeks out there, but it proves to be a pivotal song for now-pregnant Quinn. I was actually fortunate enough to be on set for this episode back in April and I’m thrilled that I can now watch (and download) the final version. Glee just keeps getting better.

The episode is scheduled for Wednesday, October 14, 2009. It airs on Fox, 9PM/8PM Central time. And to catch any episodes you might have missed, you can find them online for FREE at Fox On Demand here or on Hulu here.
Posted by Unknown at 3:45 PM