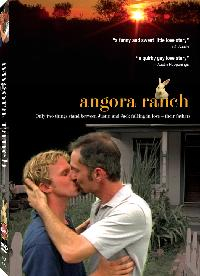 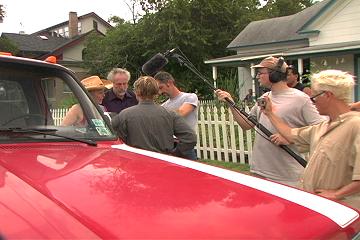 Angora Ranch is a movie about gay men that was shot on a budget, but kept me interested and laughing the entire time. It was produced, written and directed by Paul Bright, who also stars as a 46-year-old gay man from the mid-west. It is listed on Amazon.com with the following description:

Angora Ranch is a sweet, heartfelt, movie about love that transcends age, stereotypes and meddlesome family. While driving to a business meeting young and handsome Justin runs off the road to avoid a rabbit. Lucky for him he has ditched as Angora Ranch, a farm owned by hunk Jack, a man almost twice Justin's age. Just and Jack feel the heat between them immediately, while the issue of their difference in age slowly melts away they face another problem: each of their meddling fathers. Jack's dad is nosy, pushy and waiting for Jack to settle down. Justin's father is all business and never thinks his son will amount to anything. Justin and Jack slowly discover that each is what the other has been searching for all their lives, if only they can figure out what to do about their fathers.

Angora Ranch was made by Silly Bunny Pictures, which bills itself as Movies about real men from the Heartland, which is an apt statement. The gay life is not all about being a 'big city' 20-something gay, with bars and LGBT centers. There are plenty of us who don't live within an hour of a gay bar, and no gathering place to meet with other gays.

Bright just oozes with charm, and I also think he is quite hot. As I put this post together, I ordered two other DVDs from Silly Bunny Pictures, Theft and Aaron...Albeit A Sex Hero. You can find out more about Silly Bunny Pictures at their website here.
Posted by Unknown at 1:00 PM