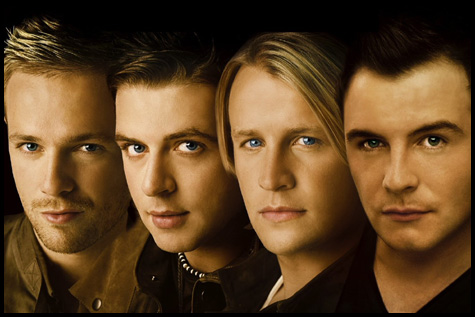 I will admit it up front, I love Westlife. I have all their CDs and DVDs. They are coming off a year of vacation time, gearing up for the release of their next CD November 30th of this year. Those Irish boys are yummy, and I can't get enough. Unless, of course, it is singing with Donna Summer, doing No More Tears (Enough Is Enough).

Westlife started out as five Irish boys, Mark, Kian and Shane, boyhood friends from Sligo, and Nicky and Brian McFadden from Dublin. McFadden left the group in 2004 to work on a solo career, leaving the group with four members. Westlife has released 8 studio albums, six with original material and two with covers, and have had 14 #1 singles in the UK, tied for 3rd behind Elvis and the Beatles. In 2005, Mark Feehily came out as gay, and was instantly embraced by the the other boys and the fans. Performing live, they have set sales records throughout the UK, and I was tempted to fly to Ireland in 2008 to see them at Croke Park, but instead purchased the DVD of the show. I am a total Westlife geek/freak.

As we get closer to the release of the new CD, I will post some older stuff to get myself ready. I am hopeless. You can find more information on Westlife by going to their official website here.
Posted by Unknown at 11:00 AM