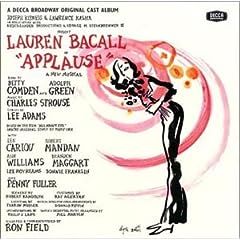 In 1970, the Broadway musical Applause had all the makings of something special. It was based on the story and movie All About Eve, the Bette Davis vehicle many still consider a classic, and one of Davis' best films. The story centers on maturing superstar Margo Channing, who takes in a young actress, Eve, to offer her a helping hand. What Margo didn't realize, but figures out, is that Eve is a ruthless, self-centered wannabe who will let no one and nothing stand in her way. The following clip is the song But Alive, when Margo visits a gay bar in Greenwich Village.

In the role of Margo Channing, actress Lauren Bacall gave a bravura performance which won her the Tony Award, and the show also took home the statue for best musical. A decade later, Bacall would appear in another Broadway musical, Woman of the Year, and Bacall picked up her 2nd Tony for Best Actress in a Musical.
Posted by Unknown at 7:00 PM