Worth Another Listen - INXS - Part 2 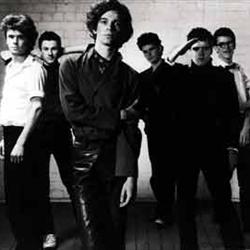 OK, in Part 2, I thought I would move on to The Swing, released in 1984, the fourth studio album for the band. It was a huge success in their native Australia, but met with only minor success in the US. However, it did get some airplay, and I certainly remember hearing several of the songs and rushing out to buy it. I was, however, already a fan after Shabooh Shoobah. The first single was Original Sin, a strong song that rode the line between rock and dance, and tackled civil rights and prejudice.

The second single was I Send A Message, with as much soul and swing as any tune could. It is a basic funk line played by a rock band. The following is the studio video, introduced by some boys on there video showcase.

INXS - I Send a Message - The best video clips are here

All in all, the band put out 10 studio albums thru 1997, when Michael Hutchence was found dead. This was the fourth. It hinted at the success to come. You can find out more about INXS at the official website here.
Posted by Unknown at 7:00 AM

Email ThisBlogThis!Share to TwitterShare to FacebookShare to Pinterest
Labels: i send a message, inxs, original sin, the swing