Worth Another Listen - The Pretenders

Only seems fair to me if yesterday I ran with Simple Minds that today I give quality time to Chrissie Hynde and her band, The Pretenders. The Pretenders are considered a British group, coming together in London in 1978. Lead singer and songwriter Chrissie Hynde, however, was an American who had moved to the UK in 1973. Chrissie formed the nucleus of the band with James Honeyman-Scott, Pete Farndon and Martin Chambers in 1978. Chrissie was instrumental in putting the group together, following years of playing gigs with Malcolm McLaren of the Sex Pistols and Mick Jones of The Clash. 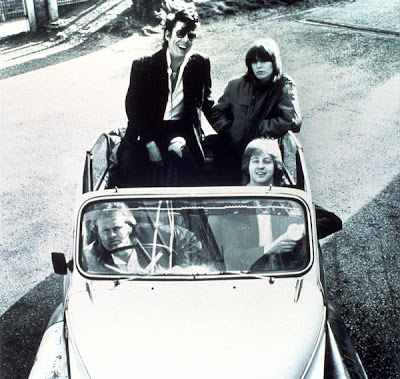 The Pretenders released their first single in January 1979, Stop Your Sobbing (a cover of a Kinks song) backed with The Wait, and picked up speed from there. The self-titled debut album was released in January of 1980, and the next single was Brass In Pocket. The song went number 1 in the UK, and Top 20 in the US, and is since considered a classic.

Over the next 20some odd years, the pretenders put out 9 studio albums, plus a live one. They last put one out in 2008, and I will have to admit I had no clue they did. It was titled Break Up The Concrete, and the singles were the title song, Boots of Chinese Plastic and Love's A Mystery. Don't Get Me Wrong scored a Top 10 hit in 1986. Their highest charting US single release would be Back On The Chain Gang, which hit number 5 in 1982.

Chrissie's distinctive vocals were so different than any other woman in rock at the time. But the most remarkable thing was that unlike the other women, Chrissie was never made to play the role of rock coquette, with cloying sexuality. She maintained her own personality, that of a talented and hard rocking woman, who eventually became a wife and mother, and still could rock hard.

Through the years, problems did crop up with the band. Drug use presented a problem, as Farndon was dismissed for his addiction, and Honeyman-Scott died days later of an apparent overdose. Within a year, Farndon suffered the same end. In 1985, Chambers was dismissed, leaving Chrissie with an entire new lineup. Eventually, Chambers returned to the band in 1993. He and Hynde remain leading the band to this day.

To find out what The Pretenders are up to now, check out their official webpage by clicking here.

Email ThisBlogThis!Share to TwitterShare to FacebookShare to Pinterest
Labels: brass in pocket, chrissie hynde, the pretenders