On September 11, 2001 I was working in Shelburne, Vermont, running a niche publication. I had gotten to work early that day, there was much work to do. By 9AM, I had received word from Erica, my friend who ran another department, about an accident at the World Trade Center. We had gotten close because she was from New York, and I had lived and worked in the City for almost 10 years, so we often spoke of our time there. 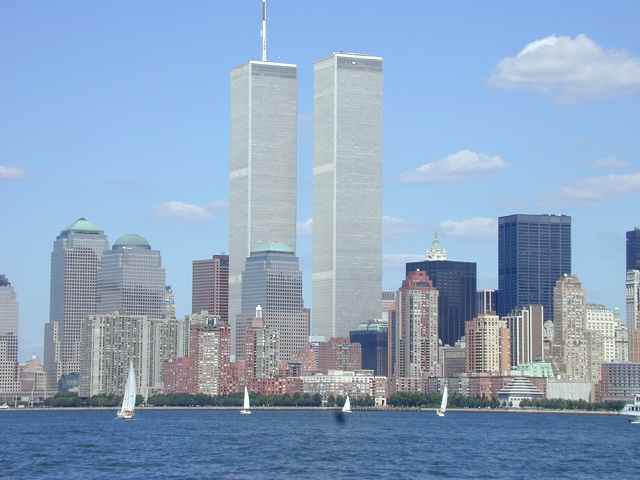 None of us in the office had TV access, but we were all on the internet. Erica was listening to internet radio news, and keeping us up on the facts. Then word of the second hit came, and it was an odd moment, filled with some fear, uncertainty, and memories.

In NYC, I started out working in the theater, and after four years left working Off Broadway and was working for a sound designer I had known, doing some work in the theater, but also doing some real estate slide shows and videos. Much of what we worked on was to sell and/or rent building space for the developers. One of the projects we did was for the opening of the opening for 2 World Financial Center, very near the site of 9-11.

It wasn't long before there were pictures and accounts found on the internet, pictures of the Twin Towers burning, the smoke billowing out and drifting over the city I spent a decade, working and living. The words terrorist attack were being used. Sure, being in the frozen tundra made me feel safe. After all, what terrorist attack would involve Vermont? But that feeling didn't last long. My family lived in Delaware, not all that far from Dover Air Force base, an important hub for the armed forces and certainly a potential target for terrorists. I needed to get in touch with family to make sure all was well.

I had a strange feeling, knowing I had worked so close to the site of the turmoil. My thoughts went to friends I still knew in NYC. They weren't people working in the financial district, but neither was I, yet I managed to spend time not far from the site.

Work had come to a virtual standstill, everyone in the offices digesting what was happening. Word of a plane crashing into the Pentagon certainly stoke our emotions. What was happening? What was coming next? the departments were huddling together, offering strength as we all focused on family and friends, even if none of us were directly affected. But there were people who thought of parents, others who had their children in their heart and mind, safe perhaps at school, but just wanting to hold them close. Word came that air travel was shut down, and that a plane had gone down in Pennsylvania that was related to the attacks. The job of putting out a monthly magazine about horses seemed so small, so unimportant. We were preparing an issue to go to the world championship show in less than a month, running articles and advertisements for a show we didn't even know would take place at this time, and seemed so very superfluous.

The Executive Director called in to the office, and suggested we close the office and go home. It seemed like a good idea, and some left immediately. Others, including myself, felt a bit of paralysis set in, huddled with others listening to the reports, unable to make the move. But soon we did, going home to watch the coverage on television.

That only made it much more real. I sat on my sofa, with Timon at my side, bombarded by the sites and sounds of the reports. Buildings collapsed, papers flying, and smoke filling the air. I called home, making sure family was safe. No friends had been in the Financial district. All my loved ones were safe, but somehow, I didn't feel safe. Not that day. Five months later, Barbra Streisand delivered a truly amazing tribute to commemorate those who lost their lives, loved ones, and a bit of the countries innocence and swagger. She went on the Grammy Awards and sang You'll Never Walk Alone. It was unannounced, and just beautiful.