Looking Back at Torch 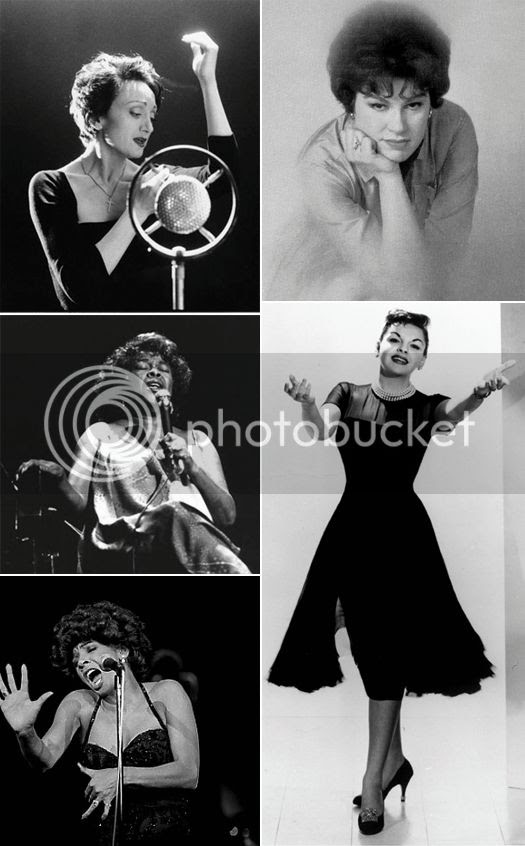 As I have been a bit busy as of late with my niece's wedding, I thought I would revisit this post from about three years ago, for it is all about love, and some magnificent ladies who can sing pretty darned well. The original post was titles 'Torch', and posted on June 21, 2011.

We are back in that smokey club, listening to the ladies sing the blues about love and loss, and matters of the heart. They stand in a simple spotlight, where you can see the smoke wafting through the air. In the background, you hear the tinkling of glasses being raised, drunk from, and collected by the wait staff. There is a whisper that stays steady in the room. But when the really good torch singer comes out, a hush will fall over the room. She will dictate the feeling of the room, be it sadness, hurt, or desire. That never changes. A clear example of the power of the lady in charge is Sarah Vaughan. With her legendary jazz stylings, she delivers a light sweetness to Hoagy Carmichael and Ned Washington's "The Nearness of You". There is just a hint of longing, just enough to keep it interesting.

Born Virginia Patterson Hensley, if she wasn't one of the great torch singers of all time, then she would have been the perfect source of material for many a song. From her struggle in the music business because she didn't fit the standard of feminine beauty in the day, to dying in a tragic plane crash at the age of 30, Patsy Cline used her gorgeous voice to garner the success and respect due her talent. Her "Walking After Midnight" added just the right amount of strength to temper the plaintiff quality a lesser singer might fall victim to that trap.

The French knew here as "The Sparrow," or, en Francais, "Piaf." She was born Édith Giovanna Gassion in Paris. She has long been regarded as France's greatest popular singer of all time. One reason was the sheer emotion she would bring to the songs, especially the ballads. Take, for instance, "Non, Je Ne Regrette Rien" can be translated as "No, I'm not sorry for anything." The song is sung in French, composed by Charles Dumont, with lyrics by Michel Vaucaire. It is most famously sung by the one and only Sparrow, Édith Piaf.

In 1964, Dame Shirley Bassey sang a song by Leslie Bricusse and Anthony Newley, from the musical 'The Roar of the Greasepaint—the Smell of the Crowd'. She was the first to record "Who Can I Turn To?", although it would later be a hit in the United States by Tony Bennett. She also performed the Hugh Martin and Timothy Gray song, "You'd Better Love Me".

When it comes to torch singers, it is tough to deny Judy Garland is up there with the best of them. When she was just 14, she filmed her first song for the movies, "You Made Me Love You". She didn't stop singing until she passed away 33 years later. Many of her great songs were about love - either looking for it, or having just lost it. She added her own touch of melancholia to Charlie Chaplin's "Smile".

Bartender, I'll have another round.
Posted by Unknown at 7:00 PM