Before there was American Idol and Adam Lambert, there was an extremely gifted and out singer named Jimmy Somerville.

He was the lead vocalist for the Bronski Beat and The Communards before he embarked on a solo career. Like Lambert, he was known for his amazing range and fearless use in soaring vocals. The difference is that Jimmy was forming the Bronski Beat the year Lambert was born. Somerville moved easily between Hi N-R-G mixes, to blues-inspired ballads. There was the amazing Why? and Smalltown Boy, and the soulful Need A Man Blues and It Ain't Necessarily So while with the Bronski Beat. The Communards had sucess with dance hits Don't Leave Me This Way and Never Can Say Goodbye as well as the AIDS-inspired ballad, For A Friend.

Jimmy never stood behind a coy answer about his sexuality. And unlike Elton John, he wwas never 'married' nor transitioned with the cover of being bisexual. Of course, that might be tough when he was singing songs like There's More To Love Than Boy Meets Girl and Read My Lips (Enough Is Enough). Most of the songs he sang he had either co-written or wrote himself. In the mid 90s, he took some tie off and left England for San Fransisco to work in the AIDS community projects so he could bring what he learned back to England.

This year, Jimmy released his 6th solo project, Suddenly Last Summer, available only as a digital download from iTunes. It is a collection of acoustic covers of songs he found on his iPod, ranging from the flirty My Heart Belongs to Daddy to the Blondie song Hangin' On The Telephone, to a heart wrenching a cappella version of (Sometimes I Fell Like A) Motherless Child, recorded live for a crowd demanding yet another encore. His Walking After Midnight owns more to anonymous sex and tea rooms than it does to Patsy Cline's original. For me, it is great to hear him sing once again, and and have a great time doing it. 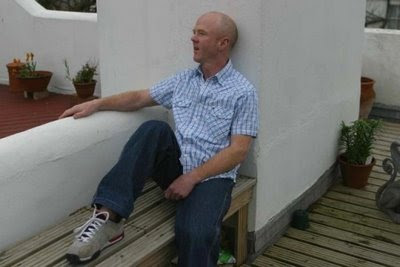